If you’re wondering what it means to crop a Pitbull’s ears, in this article, we’ll explain what it is and answer the question: “why crop pit bull ears?” We sure hope it leaves you more enlightened.

If you’re considering carrying out this procedure on your Pitbull, we’ll explain what it is, the pros and cons, as well as other helpful information. This is so you can come to an ultimate final decision as to whether it’s the best for your dog or not.

What Does It Mean To Crop A Pitbull’s Ears?

Cropping a Pitbull’s ears is the procedure of surgically cutting a puppy’s ears. This is so their ears have an upright look. When the dog’s ears are cropped or trimmed, this makes their ears stand upright as opposed to that natural floppy look their ears tend to have.

So, how does the cropping happen?

It happens by taking out a part of the pinna in order for the cartilage to stand upright. It’s also important to note that this surgical procedure can only be done on puppies and not on full-grown dogs.

The procedure is normally carried out when a puppy is between nine and twelve weeks old. The reason is that the more a puppy grows, the more his ear cartilage will get thicker. As the cartilage gets thicker, it increases the likelihood of the operation being really painful for him.

Additionally, there’s also the chance that once the twelve-week mark has been exceeded, the procedure will not, in fact, keep his ears upright.

This will defeat the whole point of having the procedure done in the first place as owners won’t get the look they are going for.

The practice of cropping a dog’s ears has been around for some centuries now.

One of the main reasons why owners used to crop a Pitbull’s ears was most likely to keep them protected while they participated in a dog fight. Historically, Pit bulls were bred to be used in the spectator sport of dogfighting before it was eventually banned. (Read more about Pit bulls and their history of dogfighting by clicking here).

In today’s modern world, a number of places have banned the practice of cropping dog’s ears. These places include countries like New Zealand, Australia, and the United Kingdom. Almost all the countries in Europe have banned this practice as well, as well as several Canadian provinces.

In the United States, on the other hand, this practice of ear cropping is still lawful. This is primarily because the American Kennel Club approves the practice in order to keep standards on certain dog breeds. The Pit bull breed is part of these dog breeds.

As a result of this, some owners want their dogs or Pit bulls to keep a certain ear shape so they can put them in dog show competitions.

It has also been claimed that cropping a dog’s ears helps to improve his hearing or assist in preventing his ear from getting infected. However, no scientific proof supports these claims.

The truth is that most owners crop their dog’s ears for largely superficial reasons. Some owners want their Pit bulls to appear more menacing and so, crop his ears in an attempt to make him look fierce and tough. This is another reason why there’s a generally misrepresentative typecast concerning Pitbull dogs.

Now that we know why some owners like to crop their Pitbull’s ears, let’s take a brief look at the historical viewpoint of how this practice came about in the first place.

Every single dog acknowledged by the American Kennel Club is categorized into a group. There are 7 groups. These groups are founded on the tasks which these dogs were created for. They typically usually continue in these tasks. Some of the groups are Terrier, Herding, Sporting and Working Group, and others.

The practice of cropping dog ears is historical and was carried out in some instances for more than 100 years now. Initially, the idea was to crop the ears so the dogs could safely carry out the tasks for which they were created.

For example, the Boxer breed of dog is categorized under the working group. These dogs have been used traditionally for pretty important tasks. These tasks include serving as courier and guard dogs for soldiers and Seeing Eye dogs used by blind people.

In this instance, cropping their ears increases the hearing of the Boxer dog which ultimately helps him to carry out his tasks as best as he possibly can.

Dogs such as Brussels Griffon were traditionally housed in stables so they could catch pests or vermin. In this instance, their ears were cropped so they could be protected from any serious scratch or bites which could be potentially injurious to the dog’s health. For example, when trying to corner a rat or other vermin, chances of getting scratched are much higher if the dog’s ears flop down. 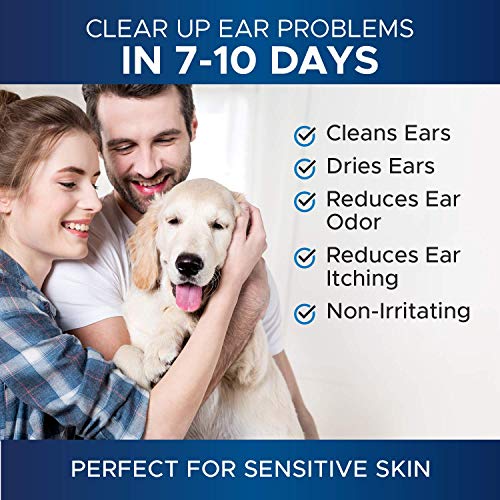 A full-grown adult Pit bull’s ears usually stand straight up and curl over the top. Depending on what Pitbull breed you have, the firmness and size tend to vary. Some of them have ears that are floppier in comparison to others.

Notwithstanding, every single dog normally has an ear part which is referred to as the pinna. This part of the ear flap consists of cartilage and is typically covered with silky skin.

If you ever need to see inside your dog’s ear canal, all you need to do is lift the pinna up in order to do so.

The ear canal is a structure that is tube-like and long. It goes down into the eardrum. No matter how closely you look, you will only be able to see a small part of it.

When a Pitbull is still a puppy, his ears will have that drop shape resembling those of a Labrador puppy or a Greyhound.

These are naturally soft folded flaps that tend to look a little too big for the puppy’s head. This shape of the ear is referred to as a rosebud.

From the name, it shows that there’s an ascending curl in the cartilage which raises up the folded flap slightly. This gives pit bull puppies an adorable and inquisitive look.

As your Pitbull puppy grows into his oversized ear flaps, his ears will start to look more proportional to his head size.

The Process Of Cropping A Pitbull’s Ears

The process of ear cropping always has to be done with the dog under full anesthesia. It also has to be carried out by a veterinarian that is fully licensed and has previously done this procedure on other dogs in the past.

The surgery usually lasts anywhere between thirty to forty-five minutes. First, his pinna will be cut to a particular length, then the edges will be sutured.

Once the surgery is complete, bandages are wrapped around his ears in order for them to heal in an upright position.

Please note the bandaging will have to stay on for either a few days or several months. This will depend on how severe the cuts are. You also need to note that your Pit bull’s ears will be painful and sensitive at this time. Expect it to last for a few several weeks following the surgery.

Your vet will provide you will the necessary medication you can administer to your Pitbull. This will help prevent infection or soreness after the procedure. 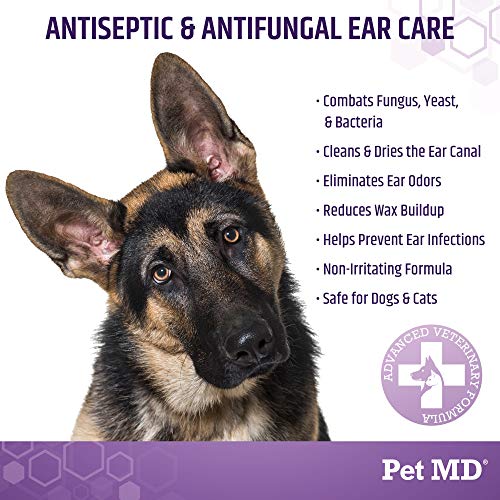 Downsides Of Cropping A Pitbull’s Ears

Like we mentioned earlier, various owners crop the ears of their Pit bulls for reasons best known to them. One of them includes prepping their dogs for dog shows, amongst other historical reasons.

For some owners, on the other hand, this process is seen as not only painful but completely unnecessary. In fact, some are of the opinion that cropping a pit bull’s ears can be quite dangerous for the dogs.

First off, as with all surgeries, there are risks associated with the surgical procedure of cropping a dog’s ears. Infections could occur after surgery. Plus, other complications due to anesthesia are also real potential dangers.

Besides that, your beloved Pit bull may become disfigured for the rest of his life if the surgery doesn’t go as smoothly as planned. Furthermore, he may need more surgery which means he may lose a lot more ear of his outer ear than you originally bargained for.

Don’t also forget that these surgeries tend to be done when he’s still a puppy so you risk your dog being traumatized quite early on in his life. You may need to consider this and the fact that it may lead to a change in his behavior.

Additionally, every dog naturally uses his ears to communicate with other dogs and their owners as well.

Deliberately messing with the natural structure of their means of communication may lead to unnecessary misinterpretations. This could mean they may unwittingly get into fights with other dogs.

This dog breed is quite susceptible to quite a number of aural problems. And when these infections are chronic, they are usually quite painful. In extreme cases, these infections have also been known to sometimes lead to damaged hearing function.

Infections of the ear are also connected to skin allergies and Pit bulls are also prone to having these issues.

Aural hematoma is frequently linked with infections and ear mites. If you notice your Pit bull scratches his ear too much or shakes his head too much, take him to the vet as doing that often could lead to the blood vessels in his ear flap bursting. This can also cause a blood bruise.  If this happens, swelling can occur and can cause serious pain to your Pit bull. 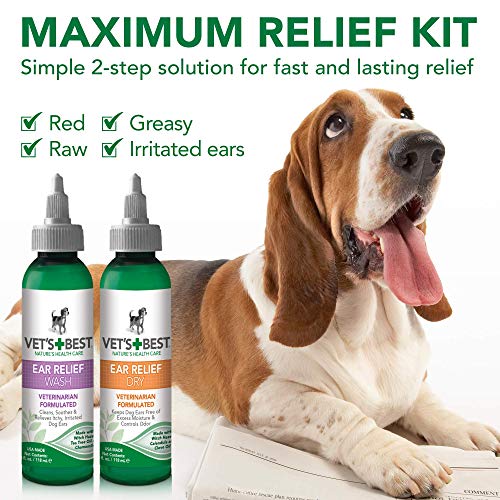 Are There Any Health Benefits To Cropping Your Pitbull’s Ears?

There have been claims that the process of cropping a Pitbull’s ears is helpful in order to prevent his ears from getting infected.

It has also been argued that this process of cropping their ears helps to improve their hearing. Now, this has not been scientifically proven.

It is viewed generally as a surgical procedure that owners choose to do for largely superficial reasons. It doesn’t actually benefit the dogs in any tangible way.

Once you’ve made your final decision, you will need to book an appointment with a veterinary surgeon who has some experience under his/her belt.

In the end, you are still not guaranteed the results you actually desire as your Pit bull’s ears may not stand upright and still maintain its floppy shape.